This Guy Loves This Old Nerd 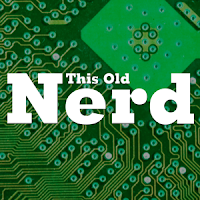 This Old Nerd is a webshow from Iyaz Akhtar.  Each episode features Iyaz solving a problem that I personally have.  That's what it feels like anyway.

A typical episode consists of Iyaz petting his dogs or holding his newborn while teaching you in plain english how to do things like set up a home media server, cut the cord on your cable TV, build your own  PC, or set up a wired network.

I've watched every episode.  I actually get excited to watch whenever I notice a new episode in my YouTube subscription list.  I can't say that about many webshows.

(PS - One of the best uses of the iPad is watching YouTube videos when you're laying in bed at night or when you've just woken up on a weekend morning. Truth.)

The only thing I can't figure out is why most episodes on YouTube have such a small view count.  I consider it a clear sign of the apocalypse that This Old Nerd has 300 subscribers and this toolbag has two million.

To keep my sanity I'm just going to assume that he gets tens of thousands of views on Finite Comedy, the ironically-titled main site that hosts This Old Nerd episodes.

(PS I just used the word "ironically" properly.  It doesn't mean what you probably think it means)

Check out This Old Nerd.  You'll thank me later.
Posted by Walt at 6:28 AM

Email ThisBlogThis!Share to TwitterShare to FacebookShare to Pinterest
Categories: tech